can any one please identify the mistake in my code???
my code is::

Jul 21, 2014  Dismiss Join GitHub today. GitHub is home to over 40 million developers working together to host and review code, manage projects, and build software together.

when i compiled it the following error is exhibited:
$g++ -o try tryone.cpp
tryone.cpp: In constructor ‘Stack::Stack(int)’:
tryone.cpp:14: error: ‘exit’ was not declared in this scope

Mistake 1 : Put your codes inside code tags or else no one will care to look at it.

Mistake 2 : exit() is a function and it is defined inside cstdlib header with respect to c++ and you haven't included it in the headers so the error not defined in this scope.

'Scope' is a concept which can be applied to many things in C++, and generally refers to the region of code in which something is accessible.

In the case of variables, variables are only accessible after they've been declared in the code. Variables which are defined in 'blocks', which generally means they're in some sort of structure, between curly brackets, are said to have the local scope as these are only accessible by things inside the block in which the variable was declared. Take for example the following in which the variable 'x' can only be accessed from the main function:

So far, we've learnt about many 'blocks', and as alluded to earlier, these can be classified generally by sections of code with curly brackets surrounding them - for example functions, while loops, for loops, if-statements, etc. Nested blocks (blocks inside blocks) also have access to the local variables of their parent blocks, take for example the following:

Change dev c font download. Note that for cases like the above where only one line should be treated as a 'block' for a statement, we can simply indent the single line and leave out the curly brackets - take, for example, the following:

In C++, we can actually create blocks without any special keywords like 'for' or 'if' just for general purpose by surrounding a section of code in curly brackets. Usually this isn't extremely useful, however in some cases it can provide a good way to isolate 'more local' variables:

On running the above example you can see that local variables (with the same name) are chosen over those of a wider scope. In the example the local variable is hiding the variable in the wider, 'main', scope, and as such there is no easy way of accessing the 'x' in 'main' from the block. This is why naming in this fashion should be avoided if possible.

If a variable (or anything else for that matter) is declared outside of any blocks, it is accessible from anywhere in the code. Variables declared this way are said to have global scope, however as convenient as these may be, they are often considered very bad practice. Take for example the following situation:

Once again the local variable takes preference over the global, and hence 5 is outputted. In this case, we could actually use the scope resolution operator (::) to target the variable using the global scope by simply not specifying anything on the left side of the operator:

C++ Function Not Declared In Scope

In the case of scope naming conflicts with classes, there is also a hidden pointer passed behind the scenes to every class member function (or at least those that aren't static, but we haven't learnt about that yet!). Take, for example, the above code snippet without the naming conventions:

Dev C Rand Was Not Declared In This Scope Video

The best way to solve this would be to change the parameter/variable names. There is, however, another way we can accomplish this by using this hidden pointer. The hidden pointer is named this, and points to the object that the member function is being performed on. As such, we can dereference the pointer and use the dot operator to get the member variable of the object instead of the local member function one. As we covered previously, the (*a).b syntax is identical to the a->b syntax, and as such using the 'arrow' operator makes a lot of sense here. Although it's a bit messy, we could use the following:

Dev C++ Rand Was Not Declared In This Scope Review 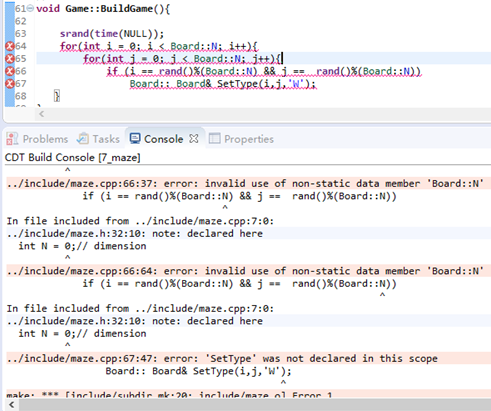 Was Not Declared In This Scope Arduino

There are actually an awful lot of nice things that you can do with access to this hidden pointer. A nice idea is making 'chain-able' member functions. So if related functions of a class return a reference to the object itself (the dereference of the 'this' pointer), then member functions could be chained up in a object.A().B().C() syntax! Note that if we don't set the return type of the function to a reference to the object type, a copy of the object will be passed each time, and so the chaining will completely break.

Was Not Declared In This Scope

Chaining member functions is pretty neat, although in this case there is a much cooler solution available if we overload some operators - but we haven't learnt about that yet.